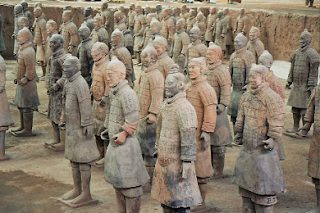 The Terracotta Army from the late 3rd century BCE? Believed to be created under the rule of Qin Shi Huang shows us a boatload of alternative facts, starting with "They will accompany me after my death". Well, who am I to say that's alternative? Maybe they did. (Names of the estimated 700,000 artisans involved in the installation's making are lost to us.)
State-sponsored 20th century propaganda posters, aka alternative facts art, may arguably be among the most significant tools for influencing public opinion in the Soviet Union. They gave rise to the art movements Constructivism, Suprematism and, later, Socialist Realism. 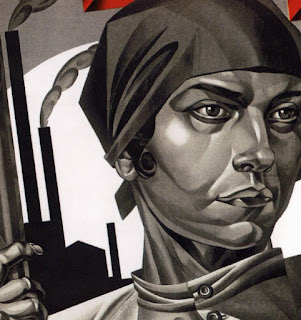 Alternative facts of a different nature kicked in when this famous beauty by Klimt, shown restored to her owner, kicked off an international lawsuit over it's provenance. Seems the Austrian's icon, kind of equivelent to France's Eiffel Tower and the Statue of Liberty in the U.S. was obtained through, well, state-sponsored theft by Nazi Germany. Yikes. 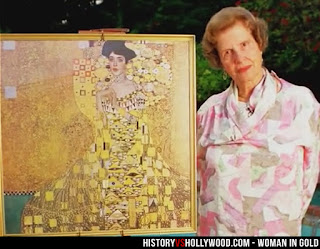 "Alternative Facts, the exhibition" I'm thinking we need it. Who's in?

Posted by Renee Richetts at 8:34 AM No comments:

Days of Books is Back


O.k., I took a loooonnnnggggg blogging vacation, right? Enough. I'm back at it, with pictures and words and ART. Regarding the words part, I'll keep them to 300 or less. Well, hold-on. Maybe more if I'm blogging an on-line lesson. You're o.k. with that, yes?
As for pictures, no holds barred. Since I last was blogging, I got a smart phone with a really sweet camera. Rocked my world.
See me here. See me on Facebook. It's all good.
Happy 2017 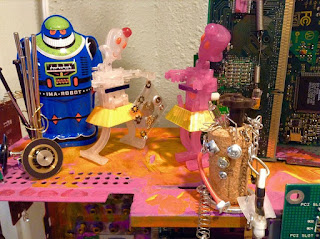 Posted by Renee Richetts at 6:13 AM No comments: 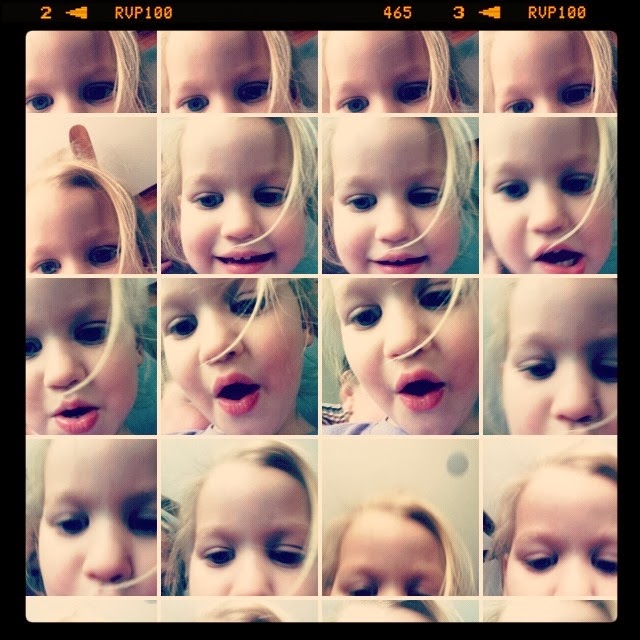 Recently I became the proud owner of an iPAD mini, a big step for me given my firm, but often paralyzing, belief that whatever technology is out there, I can buy it cheaper if only I just wait.  Essentially, this has turned out to be true, but in the waiting, I’ve missed out on using some fine techno-advancements. Well, so be it.
Back to the iPAD. Last fall I was showing it to my two-year old grand-niece. Both her parents have iPhones. Bet you know where this is going. Yep, Ms Thang, who still speaks in 2-3 word sentences, is all over the selfie-taking capabilities of Auntie Néna’s new toy—even taught me some tricks. And learned to use the simple editing functions in the iPAD after two demos. Just call her the Cropping Queen.
I have long been fascinated by selfies. Even before the term made its way into the Oxford dictionary last year, I was keeping an eye out for unique examples of self-portraits that used any photographic technology. Timers, mirrors, window reflections; I’ve been a sucker for all of them. Since getting my iPAD, I’ve learned that there are “sub-genres” of selfies such as “Went there, Saw that” and Went there, ate that” to name but two. Who knew?
Until the iPAD joined my studio, I was exclusively interested in selfies taken by others, and I basically still am. There are some fine, creative Selfographers out there, and I’ve loved their ego-art for years. For Selfie which opens February 8th, I reviewed over 1500 images asked for boatloads of permission, and have pulled together 20 examples by 15 Selfographers whose crazy-strange sense of the world, and themselves in it, put some pizazz into my imaginings.
Selfies Curated by Renée Richetts, with Selfographers B. Binkowski, B. Hambelton, V. Huckins, J. Love, A. Magana, Michayla, C. Nguyen,  B. Plummer, R. Plummer, A. Robertson, P. Richetts, R. Richetts, S. Richetts, and
K. Richetts-Nguyen will be on display at:
Richetts’ Space, 262 E. Grand Ave, Escondido CA 92025.
Hours are Tuesday,  and Thursday-Saturday (closed Sunday, Monday and Wednesday) 1100-4 p.m.
February 8- March 29, 2014.
Opening reception February 8th, 5:30-8p.m.
Posted by Renee Richetts at 5:17 AM No comments: 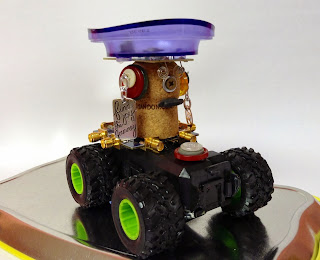 I've been living in the Chicago Northshore for just over a year and have managed to tuck a number of quintessential Midwest experiences under my belt.
The WINTER, yes, yes, there's always that. But these days what comes more to mind for this 4th-generation California transplant is the bounty: the public art which is over-the-top amazing, the people who are genuinely friendly and kind, the nearby forest reserve that is a constant source of four-legged and feathered visitors, and every time I take the Metra into The City, where I feel like the world is my oyster. 3 monster-sized Dick Blick outlets? Free music in Millennium Park? Eye-candy everywhere you look along Michigan Avenue? Bring it on!
Throwback trip down memory lane to 2001. I decided I needed to up my art career game in the West, so I made myself commit to having art work on public display, in an exhibit,  every day of 2002. S.e.r.i.o.u.s.l.y. hard to do, but the results in terms of work produced, what I learned about the business of art, and the contacts I made were incredibly positive.
Fast forward to next year. I'm feeling the need to do a repeat, kind of. Basically, I know that if I want folks out here to have a sense of my art, I need to get hopping. Expect work on public display in the Midwest every month of 2014. That's the plan and I'm sticking to it. On-line posts won't count. Gotta be real work at a physical address.
Fortunately, January and one day in February are set
(http://theartcenterhp.org/exhibits/future-exhibits January 10 – February 1st, 2014 Opening Reception: Friday, January 10th 6:30-9:00pm), and February/March is about to be juried.
Wish me luck.
TTFN,
Renee

Posted by Renee Richetts at 5:45 AM No comments:

One foot on the West Coast, one foot in the Midwest: that’s the way it’s been for nearly two years now. As with all good moves, there comes new art.
I mean, who knew you could experience full-blown culture shock, within your own country, where you speak the same language (sort of) as the population in your new state residence,  eat the same foods (not exactly), and celebrate the same holidays in the same way (not even maybe)???? Did you know that the SPAM museum is here in the Midwest? Or that Organic Prairie Vodka (1) exists and (2) is surreal-ly delicious? It’s true.
So how does a transplanted artist absorb and process all this wonder? In the studio, pounding metal books. But of course!
The Midwest is a trip, Chicagoland is amazing, I survived my first full winter. And I’ve been making art all about it. Much of the new work will be on display in my California Richetts' Space*, just in time for the Art Riot Reception at the Escondido Municipal Gallery 5:30-8 p.m. on November 9th.  I’ll be at the reception too, hoping to see many good friends again. Ask me about the cheese curds, or frozen hair, or if deer in the front yard is a good thing. I’m ready with the answers!
TTFN, I’m off to get my Illinois driver’s license. LOL.
Hope to see all you west-coasters a week from Saturday.
Renée

Posted by Renee Richetts at 9:57 AM No comments: